This came about through problems with the old boiler rather than careful planning. Firstly I replaced the thermostat with a Smart controller, this was about 5 years ago and the choice was limited but I got an Owl controller which allowed us to control the heating with a smart phone. This allowed us to monitor electricity use as well as program the boiler simply online and turn it off for holidays etc. The controller was easy to fit as you replace the existing thermostat and use the same wiring. Once this was done the heating started coming on only when the temperature in the house fell below the required temperature we set. The previous controller turned on the heating when it was programmed to, regardless of the internal temperature and waited for the thermostat to turn it off again. This fine control and ease of use saved us 10% on our gas bills straight away.

The monitor really helped us concentrate on electricity use around the house and focus on reductions, however it also coincided with having kids and being at home a lot more so our usage actually went up for each successive year, as shown below. Now they are a bit bigger we are out more and using the meter to concentrate their minds too and starting to take our usage down again: 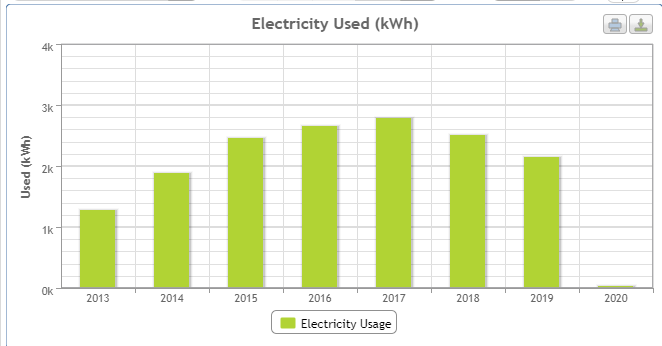 The boiler was an old Worcester and only about 64% efficient. A fault developed with it so it started heating up radiators whenever we used the hot water so we decided to get rid of it. I did plenty of research and luckily enough this coincided with Ecobuild so I was able to go round stalls there to look at a good range of boilers and ask silly questions. Efficiency of most boilers is well over 90% so my main concerns were how it would fit in my kitchen and reliability. I eventually settled on an Intergas boiler, not quite so common in the UK but it came with a 10 year guarantee and has very few moving parts and good reliability. We also got TRVs installed on all the radiators.